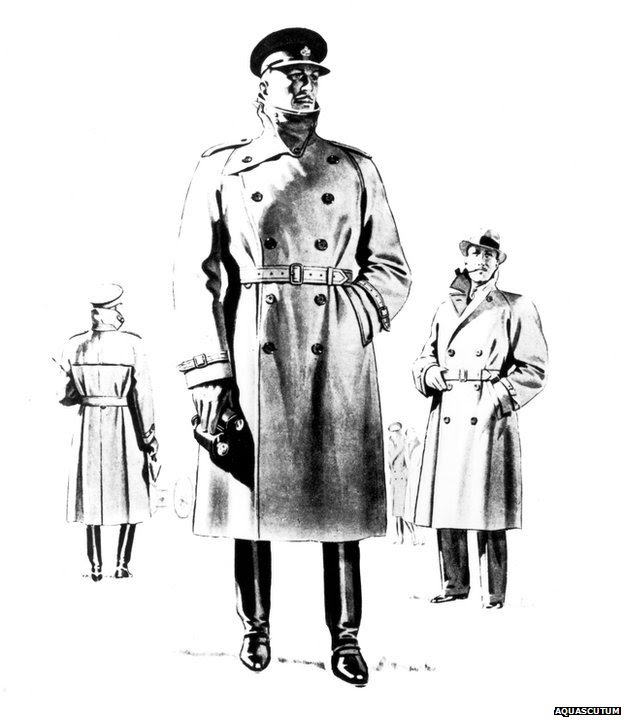 It is a fashion classic that has endured through the decades. But away from catwalk shows and Hollywood glamour, the trench coat's first starring role was in World War One kitting out battle-weary soldiers.
From Humphrey Bogart to Audrey Hepburn and Kate Moss, the trench coat is now synonymous with elan and sophistication.
Clocking up countless appearances on the silver screen and in the glossy pages of fashion magazines, it is considered a timeless wardrobe essential.
But while today it adorns the shoulders of supermodels and celebrities, it seems - despite the heavy clue in its name - its origins in bloody battlefields may be less well-appreciated.
"If you read articles about '10 items everyone should have' the trench coat will probably feature along with a pair of jeans and a leather jacket," says Amber Jane Butchart, author, blogger and associate lecturer in cultural and historical studies at London College of Fashion.
"It's become a perennial classic.
"Many people may be surprised about where it comes from, but for centuries fashion has influenced military dress and vice versa."
As World War One took a stranglehold on Europe, the Allies and opposition German forces dug deep with defensive lines stretching from the North Sea to the Swiss border.
There in the trenches as the onslaught raged were the soldiers - caked in mud and battered by biting winds. 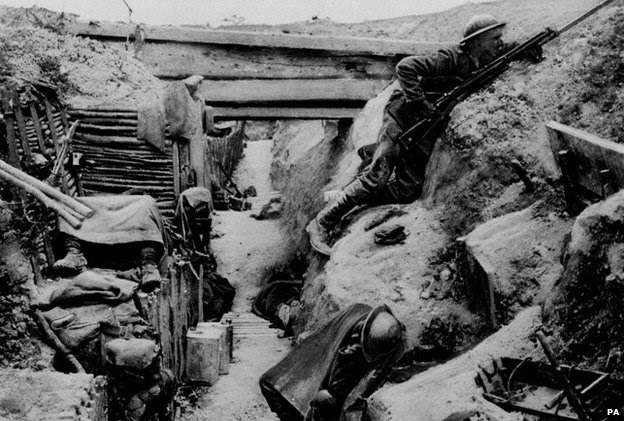 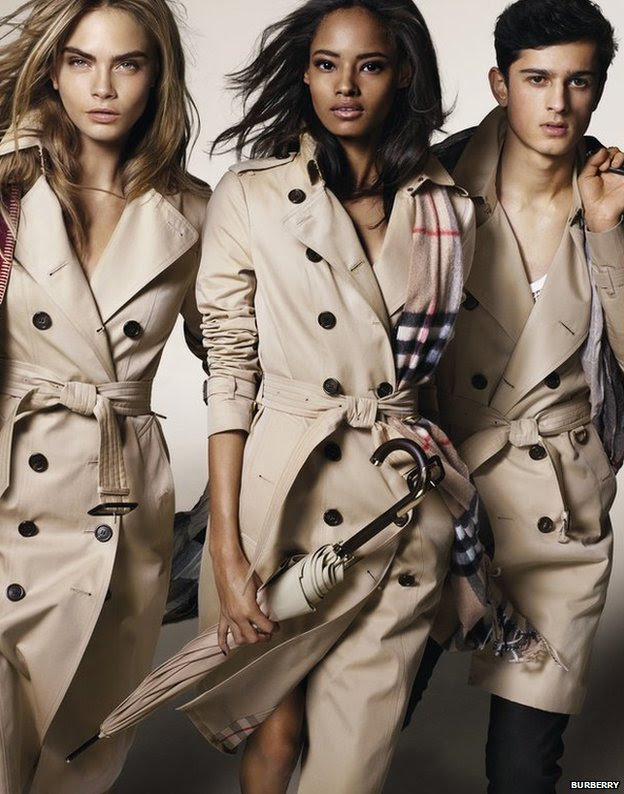 Today the coats are more associated with preening and pouting
Their heavy greatcoats - long wool overcoats which had been regulation garments for British forces since the Crimean War of the 1850s - proved ill-suited to the desperate conditions.
In contrast, the lighter, shorter, waterproof coat produced by English clothing companies such as Burberry and Aquascutum was a perfect fit.
But they were not its only practical benefits.
Epaulettes displayed an officer's rank, while a gun flap buttoned at the chest was designed to provide an amount of additional protection when in combat.
Map cases and other equipment were attached to D-rings on the belt, and covering the upper back area was a storm shield that enabled water to run off the coat cleanly.
Their subdued colour, too, played an important role.
"It became imperative for soldiers to not stand out," says Ms Butchart, who is writing a book examining the links between military wear and fashion.
"Khaki is the Hindi word for dust. Before that, military clothing was incredibly brightly coloured.
"For centuries you needed to recognise the side people were on very easily, so colours like blue and red that were quite easy to dye relatively cheaply got used a lot in European uniforms.
"However, by the time of the African campaigns [in the late 19th Century], warfare was getting more industrialised and those colours were basically putting a target on your soldiers."

Who invented the trench coat? 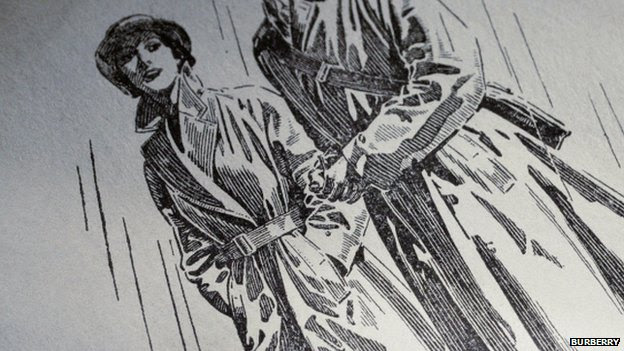 That shift reflected a marked change in the psychology of battle, says Jane Tynan, lecturer in cultural studies at Central Saint Martins in London and author of British Army Uniform and the First World War: Men in Khaki.
"The introduction of the trench coat is really significant - it's a story of clothing becoming part of the technology of warfare.
"Armies' very bright colours were often reminiscent of their flag, but they were also associated with honour.
"In World War One, French soldiers wore red trousers because they felt it was dishonourable to be in camouflage.
"But the British were enthusiastic adopters of khaki from the time of the Indian Mutiny in 1857.
"It went hand in hand with a belief that pragmatism was more important than honour.
"Uniform became a lot more functional and decorative features were less in evidence."
Weighed down by sludge, it was not unusual, Ms Tynan says, for frustrated soldiers to slash away feet of fabric from their greatcoats using bayonets.
The trench coat alleviated that issue, but despite its suitability it was never a regulation garment supplied to each and every soldier. 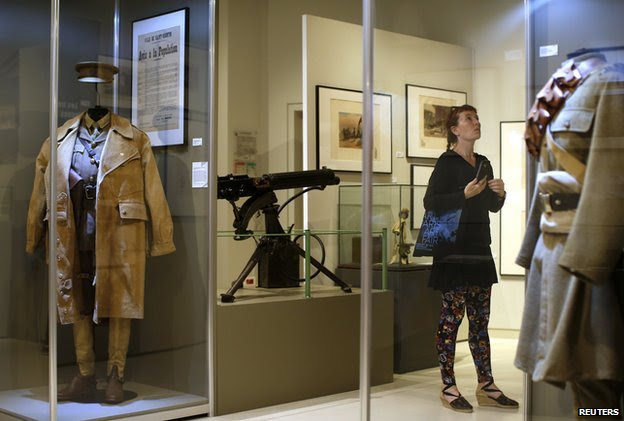 This Burberry trench coat is featured in an exhibition at the Museum of the Great War in Meaux, near Paris
Adopted by officers who, unlike other ranks, were allowed to procure their own clothes from tailors and outfitters, its use became more widespread from 1917 onwards.
Desperate to clothe an army which had quadrupled in size, the manufacturing of uniforms was put out to trade by the War Office with civilian firms entering into mass production.
It resulted in cheaper garments - a benefit for newly recruited officers, some of whom were less well-off than their predecessors.
It highlights, Ms Tynan argues, an issue that still resonates today with concerns over kit shortages for British soldiers during their recent campaigns in Afghanistan.
"A method previously associated with clothing lower ranks, it presented firms such as Burberry and Aquascutum with a huge opportunity to market the trench coat.
"Having a mass-produced item for officers became quite normalised.
"There are so many myths around soldiers all being clothed and kitted out to the necessary standard, but the reality is very different.
"When you think of the scale of the First World War, you realise it would have been impossible to fully regulate the dress of each soldier for such a large conflict."
While the trench coat's popularity was not restricted to the battlefield, the qualities embodied by the armed forces did help widen its appeal.
"Even during the war you got ads in the Illustrated London News for the Burberry trench coat being sold to men and women," said Ms Butchart.
"It was a unisex item.
"Then when the soldiers returned from battle there was the idea of heroism and patriotism that people wanted to buy into." 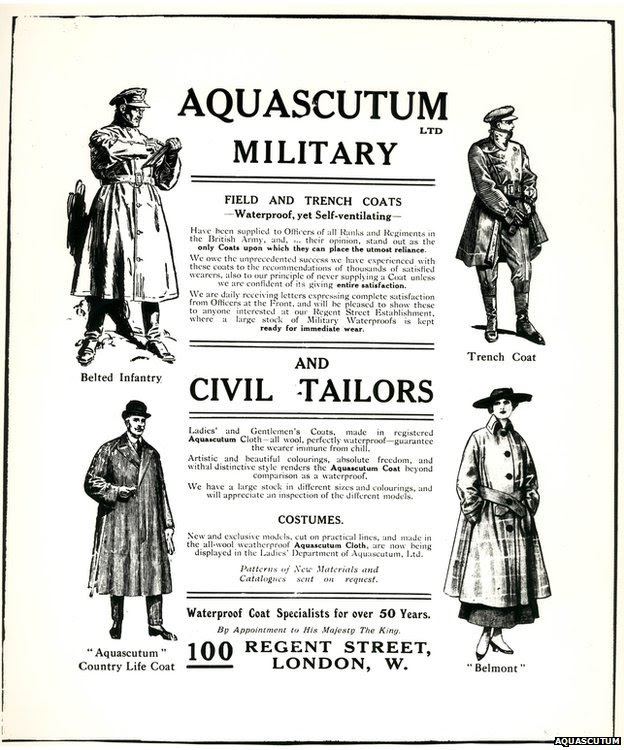 As with this example from Aquascutum, many adverts for trench coats played up links to military heritage
But having been firmly rooted in military campaigns, the coat was soon to be taken in a different direction - one which would shape popular perceptions in decades to come.
As Hollywood cemented its grip on the public imagination, filmgoers increasingly looked to the stars of the silver screen for fashion inspiration.
Men were drawn to the effortless cool displayed by detectives in slick film noir crime thrillers, while alluring leading ladies such as Marlene Dietrich provided a template for women to follow.
"By the 1930s Hollywood was really influential," said Ms Butchart. "Its reach in terms of fashion was becoming huge.
"Warner Bros produced a lot of gangster films that featured characters wearing trench coats.
"And by the time of World War Two they were becoming strongly linked with film noir and Humphrey Bogart.
"He embodied that trench 'attitude'. Many people think of him in Casablanca, even though he only wore one in two scenes." 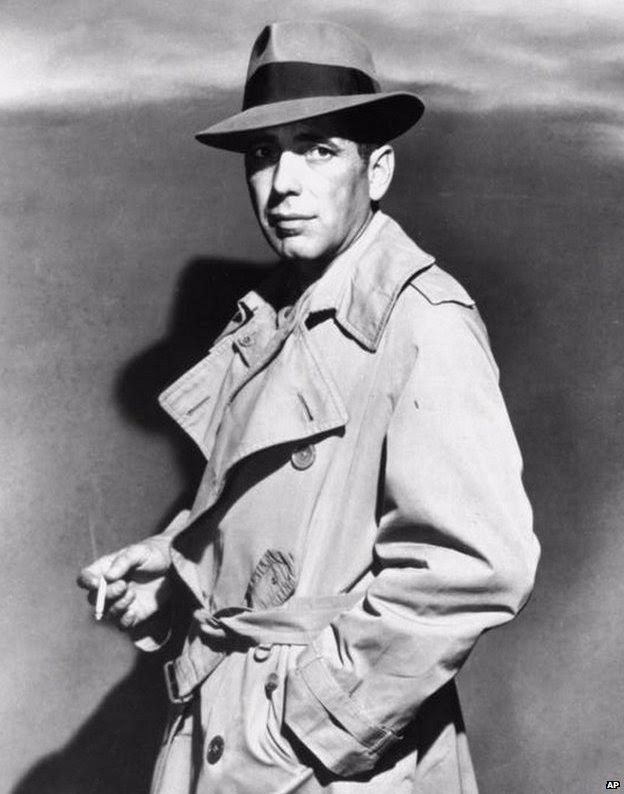 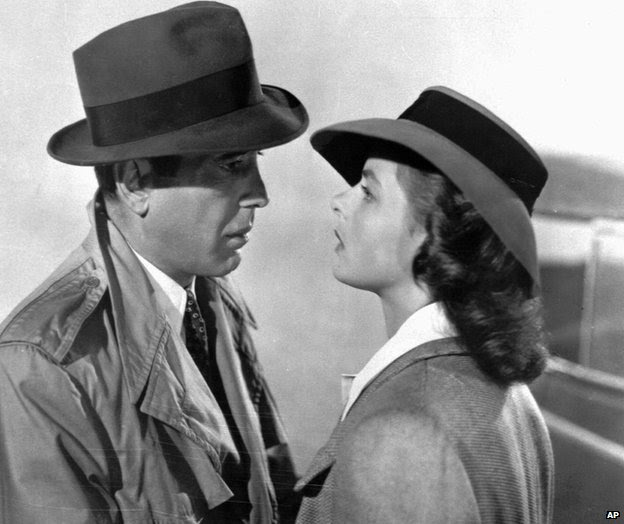 The following year, 'Bogey' starred alongside Ingrid Bergman in romantic drama Casablanca
The coats remained a favourite with Hollywood costume departments into the 1960s and a beige trench in romantic comedy Breakfast at Tiffany's helped confirm Audrey Hepburn's status as a style icon.
That transition will be the focus of From Field to Fashion, an exhibition running at Winchester Discovery Centre in Thomas Burberry's home county of Hampshire from 4 October until 21 December.
Alongside an authentic World War One Burberry cavalry trench coat will be the one Dietrich wore in 1948's A Foreign Affair - on loan from Berlin's Deutsche Kinemathek Museum.
Today, the coat's popularity on catwalks and the High Street shows little sign of waning.
The centrepiece of Burberry and Aquascutum's lavish ad campaigns, other brands continue to produce their own versions annually too.
In fashion terms, the trench coat has gone on to win the style war.
But, a hundred years after the outbreak of World War One, its beginnings on the battlefields should not be forgotten.
Posted by JOHN CALLANAN Hats eye_of_the_designer instragram at 8:00 PM