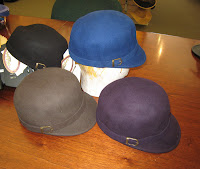 A customer recently christened me "John (the wizard of head-wear/accessories)" which is a very humbling complement. Afterwards he said he was drunk and it was late when he sent the e mail but nevertheless, it was a kind backhanded complement. 3 years ago he carried no hats in his 4 stores and today hats are the fastest growing department in his store. This year we should hit $90,000 wholesale and he loves the margins. I listen to his needs and he follows my trend suggestions.So here is where it's (h)at for fall 2010.
*MILITARY/UTILITARIAN a la Mark Jacobs. Just go easy on the camo. Look for more military details in the cuts, colors and trims.The MILITARY cap shown will be available in ALL MAJOR NATIONWIDE stores under the John Callanan Legacy label.
*THE AVENGERS a la HERMES. Think Joanna Lumley as Purdy donning a British bowler and you got the look. Lilly Cole has been pulling the look of quite well lately.
Posted by JOHN CALLANAN Hats eye_of_the_designer instragram at 7:48 PM