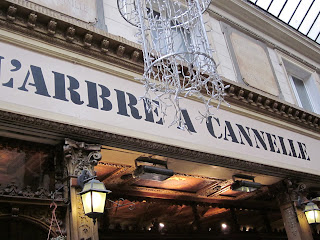 One of my favorite lunch spots in Paris is L'arbre a Cannelle, a Jewel box of a restaurant, located in Passage des Panoramas. 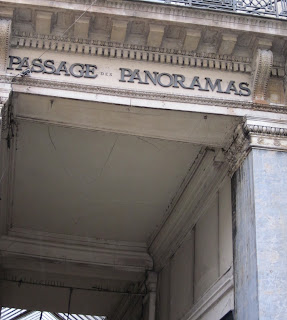 Built in 1800, this enclosed passageway is really an early shopping center a la Francaise. It has not changed much in the past 211 years.
I jut love to find a little corner table outside (which is still inside) and people watch. 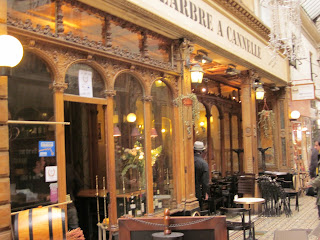 I usually order magret de canard with roast potatoes and a little salad frissee, washed down with 1/4 craft of red wine. Followed by one of their delicious tartes and a cafe au creme for dessert.
The decorative wall paintings are quite beautiful. 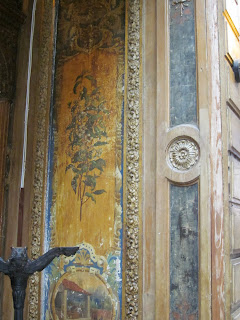 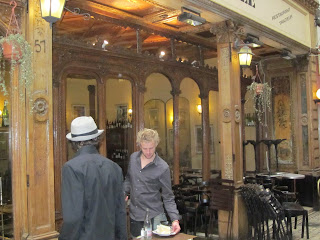 The Passage des Panoramas is a roofed commercial passageway located in the IIe arrondissement, of Paris between the Montmartre boulevard to the North and Saint-Marc street to the south. It is one of the earliest venues of the Parisian philatelic trade, and it was one of the very first covered, airy commercial passageways in the world. Bazaars and souks in the Orient had roofed commercial passageways centuries earlier but the passage of Panoramas innovated in having glazed roofing and, later on, gas lights for illumination. It is thus the precursor to all the city gallerias of the 19th century and the covered suburban and city shopping malls of the 20th century.http://www.facebook.com/callanan.hats


The passage was located from the start in one of the richest sectors of Paris. Over the centuries it has been home to many famous commercial establishments and institutions such as the Académie Julian.

The passage was built in 1799 on the former site of the Montmorency-Luxembourg private hotel. Its name comes from an attraction installed above the original entry: two rotundas where panoramic views representing the landscapes of large cities were projected. The rotundas were destroyed in 1831. In the 1830s, the architect Jean-Louis Victor Grisart renovated the passage and created three additional galleries inside the block of houses: the Saint-Marc gallery parallel with the passage, the gallery of the Varietes which gives access to the entry of the artists of the theatre of the Varietes, and the Feydeau galleries and Montmartre. Stern the famous engraver settled there in 1834, then merchants of postcards and postage stamps, and some restaurants moved in. The part of the passage close to the Montmartre boulevard is richly decorated, while the distant part is more modest. The passage, as it was in 1867, is described in chapter VII of Émile Zola's novel Nana.
Posted by JOHN CALLANAN Hats eye_of_the_designer instragram at 7:10 PM