sometimes red is just red. curtsey of the WSJ

Stocks In The News

In a ruling Wednesday, Judge Victor Marrero denied the fashion house's request to halt sales of similar shoes made by Yves Saint Laurent, saying Louboutin would not likely prove its use of the color deserved legal trademark protection.
The issue may pale against the sea of red flowing in the markets lately, but it is big business for Louboutin, which has long colored the bottoms of its shoes to make them stand out.
The company won a trademark for red soles from the U.S. Patent and Trademark Office in 2008 and filed suit against PPR SA's YSL in federal court in Manhattan earlier this year, alleging some of its competitor's shoes featured soles in shades of red that were uncomfortably close to its own. Judge Marrero wasn't swayed. 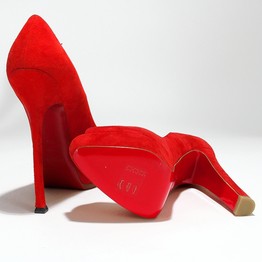 Lindsay Holmes/WSJ
A federal judge initially denied Christian Louboutin's trademark lawsuit, which accused Yves Saint Laurent of copying its signature red-soled shoes. Left, a Yves Saint Laurent Trib Too pump. Right, a Louboutin Bambou pump. Both pairs cost $795 in New York City.
"Because in the fashion industry color serves ornamental and aesthetic functions vital to robust competition, the court finds that Louboutin is unlikely to be able to prove that its red outsole brand is entitled to trademark protection," the judge wrote in his opinion.
Louboutin didn't respond to requests for comment. David Bernstein, a partner at Debevoise & Plimpton who is representing YSL in the case, said the company is gratified by the court's decision. "No designer should ever be allowed to monopolize a color," he said.
Color is regularly trademarked in industrial uses—for instance, pink fiberglass insulation—where its only use is typically to distinguish a product. It gets trickier in matters of fashion, where color actually serves a fundamental purpose.
Complex uses of color like Burberry's plaid and Louis Vuitton's monogram have been trademarked, as have Tiffany's signature blue boxes. Levi Strauss & Co. has filed hundreds of suits against competitors it alleged infringed on its trademarked stitching and tag that decorate the back pockets of its Levi's jeans.
But Louboutin's claim breaks new ground, says Susan Scafidi, academic director of the Fashion Law Institute at Fordham Law School, who said she hopes the case goes to trial. The dispute is "the most interesting case in fashion intellectual property that has come down in the past couple of years," she says. "I really want an answer."
The judge delivered his views with flair of his own, invoking Whitman ("A lawyer said, What is the red on the outsole of a woman's shoe?) and asking readers to visualize "industrial models sashaying down the runways in displays of the designs and shades of the season's collections of wall insulation."
He even sketched out an imaginary suit between Picasso and Monet. His conclusion: "Color constitutes a critical attribute of the goods." In other words, it can't be trademarked.
But the order didn't settle the broader issue. The judge ordered the parties to show up in court next week to argue why he shouldn't just cancel Louboutin's trademark outright.
Some in the industry say the recent development just raises more nettlesome questions for designers trying to have some measure of protection for things they consider fashion signatures.
"Clearly, the [United States Patent and Trademark Office] took an unprecedented decision when it agreed to register the color as a mark," Steven Kolb, chief executive of the Council of Fashion Designers of America, wrote in an email. "The issue is who has authority to decide this … the USPTO or the courts?"
—Christina Passariello contributed to this article.
Write to Ray A. Smith at ray.smith@wsj.com and Ashby Jones at ashby.jones@wsj.com
Posted by JOHN CALLANAN Hats eye_of_the_designer instragram at 7:52 PM