Hats an Anthology by Steven Jones, opened at the Bard Graduate Center, 18 West 86th street NYC this week after a successful run at the Victoria and Albert museum in London. Situated in a town house, it is an intimate setting for a wonderful hat exhibition. Stephen Jones, milliner extraordinaire, was the perfect host meeting and greeting people in the foyer. 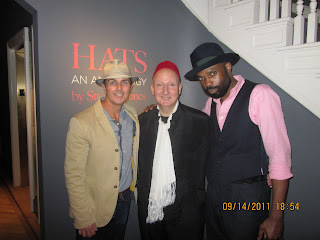 Mr. Jones bookended by me and Mark from JJ Hat Center.
The reason that this hat exhibit was the best I have ever seen was due to the fact that it was curated by a milliner. Stephen Jones knows hats, he lives hats, he understands hats, and hats are never an after-thought to him.
Unlike most hat exhibits  which are curated by era, Mr. Jones correctly curated them by themes/inspirations and the effect was wow, wow, wow. A cue might have a hat from the 1600 next to a hat from 1999, which proves my point "that there is very little new in millinery, but as hat makers we reinvent dormant looks. The hat shape, be it a fedora, cloche or cowboy is a very small canvass to work with. It's all about the trim".
So here are some of the wonderful inspiration that bought my eye and sent my heart a flutter. 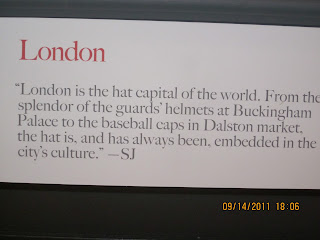 Paris may be about couture but London is about hats. There is nothing more British than their love for crazy hats. 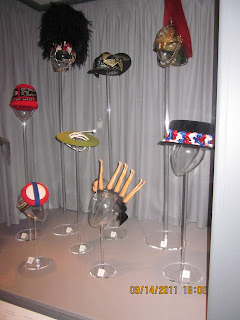 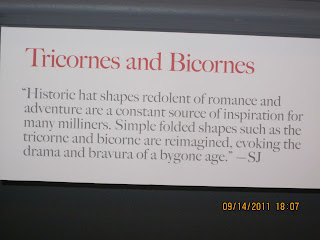 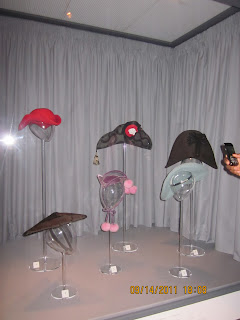 The first floor is a little historical but hang on in there. It gets way more exciting...... 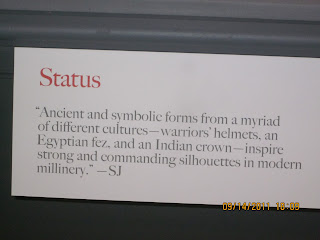 All hats are Crowning Glories. We know the French by their berets, the turk by his Fez, the jewish settle by his yamacha.
Posted by JOHN CALLANAN Hats eye_of_the_designer instragram at 2:45 PM