What is a Heisenberg hat

A Heisenberg hat is named after the pseudonym used by the character of Walter White in Breaking Bad. It is a classic black wool felt hat with a black tailored band. This style of hat has always been popular with musicians. You can buy this style in any classic hat store like JJ HAT CENTER, CITY HATS, PORK PIE in NYC or Goorin Bros. nationwide. 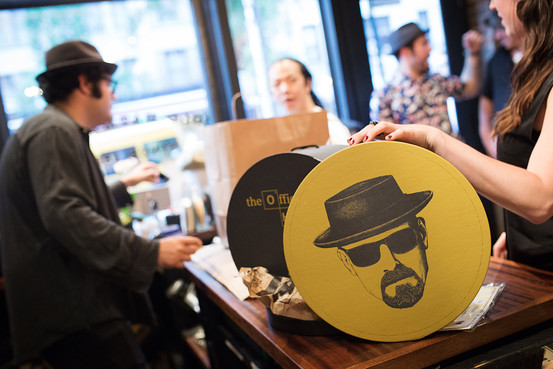 Agaton Strom for The Wall Street Journal
A box containing a Heisenberg hat, a black wool felt porkpie style made famous by the character of Walter White on the TV show ‘Breaking Bad’ at Goorin Bros. hat store.

By Carmel Melouney
On the same night that spring fashion week came to a close in New York,  men like Joe Percoco, 55 years old, from Hillsborough, N.J., lined up to purchase this fall’s hottest fashion accessory for men: a black wool porkpie hat with a grosgrain trim.
The hat is inspired not by any catwalk collection nor stylish celebrity, but rather a fictional high school chemistry teacher, Walter White, who manufactures drugs to ensure his family’s financial security on the hugely popular AMC television series “Breaking Bad.”
“I just had to get the hat, that’s why I’m here,” said Mr. Percoco, an IT worker. “I’m not a hat guy, but now I’ve been turned on to the world of hats.” 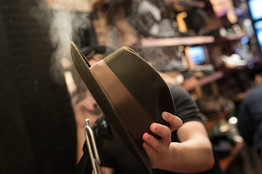 Agaton Strom for The Wall Street Journal
A hat is being steamed at Goorin Bros. hat store.

Mr. Percoco had taken the day off work at Rutgers University so he could ensure he was at the front of a line of about 40 customers waiting outside the Goorin Bros. Hat Shop on Bleecker Street in the West Village on Thursday, when the hat went on sale for the first time in New York.
“I got here at 7 a.m., and I brought a book and I read it. ‘Dust’ by Hugh Howey. And I went to Starbucks,” he said.
Goorin Bros. has produced only 1,895 Heisenbergs, which is named after the pseudonym used by the character of Walter White, a former chemistry teacher in Albuquerque, N.M., who starts manufacturing crystal methamphetamine after he is diagnosed with inoperable lung cancer so he can pay for his treatments and provide for his family.
The company has made this number because its business began in 1895 ,when craftsman Cassel Goorin started creating custom-made hats in Pittsburgh, Pa.
The Heisenberg, which retails for $212, was first released during the Comic-Con event in San Diego in July and sold out immediately. On Thursday night, Goorin Bros. held parties at its West Village store and its Park Slope store on 5th Avenue to celebrate its release in New York. The Williamsburg store, on Bedford Avenue, will release its Heisenbergs on Sunday. 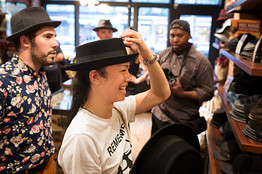 Garrett Henson, a hatter who works at the Bleecker Street store, said he had never seen a hat garner so much attention in the two years the store has been operating.
“Tons of people have been asking about it for months now, it’s been a big, big deal,” said Mr. Henson.
“Lots of people were asking for Gatsby-style hats over summer, but I haven’t seen anything like this for a specific hat.”
Mr. Percoco had searched for the porkpie hat on eBay and seen people bidding between $350 and $550 for the in-demand accessory.
He joined the Goorin Bros. mailing list when he saw their New York stores would soon be selling the Heisenberg hat, the same one worn by Mr. Cranston’s character on “Breaking Bad.”
“They are also selling the Jesse hat, a Captain Cook knit hat, and I also bought that too,” he said, referring to the character of Jesse Pinkman, Walter White’s sidekick played by Aaron Paul.
Marc Rosenzweig, 49, from Long Island, said he had tried to buy the Heisenberg online several times when it was available earlier this year, but the Goorin Bros. website kept crashing due to the high demand.
“I’ve been waiting for this hat for months,” said Mr. Rosenzweig, who runs a pet hotel in Deer Park, N.Y., and had been waiting since 9:30a.m.
“I bought a cheap knock-off from a street vendor a year ago, but it’s felt. This will be a nice wool hat for fall, and I’ll wear it for Yom Kippur,” he said.
King Tommy Au-Yeung, 33, from Astoria, purchased the Heisenberg, the Captain Cook knit hat and another hat inspired by “Breaking Bad,” a baseball cap for $30.
“I’m all about ‘Breaking Bad,’ I’m completely obsessed with the show,” said Mr. Au-Yeung, who compared the narrative to an American classic such as J.D. Salinger’s “The Catcher in the Rye.”
“I own 12 ‘Breaking Bad’ t-shirts, some mugs and the DVDs on Blu-Ray,” he said. 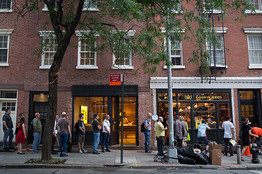 Agaton Strom for The Wall Street Journal
Customers lined up to buy a Heisenberg hat.

Itay Lantner, 28, also from Astoria, came to the store with his wife, Doris Domoszlai-Lantner, after the couple had seen the hats on a recent trip to San Francisco.
“I think it looks cool and I’m also a fan of the show, but I’m not one of these conventional fan guys who buys clothing associated with a TV show,” said Mr. Lantner, a classical musician.
“This is the first time I’ve ever lined-up for anything, I won’t even line-up for a bar.”
“It’s cool,” said Ms. Domoszlai-Lantner of her husband’s new hat.
On Friday morning, there were three Heisenbergs left at the West Village store after Thursday night’s rain saw the queue disperse, said Goorin Bros. shopkeeper Alex Mroz.
“This is the one and only time we’ll have them, it’s a brief love affair with these Heisenbergs,” said Mr. Mroz.
Posted by JOHN CALLANAN Hats eye_of_the_designer instragram at 7:22 PM