Even hatlife support_hatlife.com@bmsend.com is jumping on the bowler trend. Once again, I am ahead of the curve. 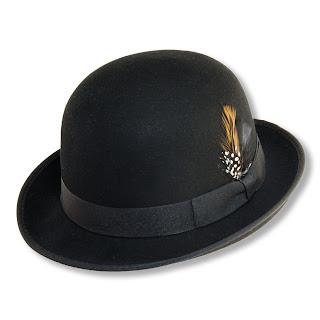 According to Diane "I hear a lot about the rising popularity of the Bowler Hat, but I have yet to see them on any actual people (but then again I live in Florida). But according to UK Express and the Daily Mail Reporter the Bowler is hot stuff.
Some of the UK papers credit Jude Law with helping the comeback of this Chaplinesque hat. And at the same time the British retailer, Austin Reed has started stocking Bowlers for the first time in 12 years (cheers to that) because of the demand. 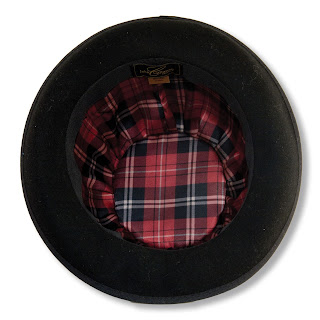 The press is quite annoyed that the store - that brags about it's British lineage (Design is core to our heritage, says their tagline) bowed to market forces and bought the hats from China.

"The company claims it had to look further afield to give the bowlers a retail cost of £50, as British-made hats often cost more than £200."

The bowler was created in the mid 1800s by hatters William and Thomas Bowler, after a commission from Edward Coke, brother of the 2nd Earl of Leicester. By the early 1900s it had become very popular.
The bowler was made famous by Charlie Chaplin and Laurel and Hardy. After the Second World War sales declined (aside from a comeback in the mid-Sixties by actor Patrick Macnee in the TV show The Avengers) it was slowly sacked into oblivion.
Austin Reed, which celebrates its 110th birthday this year, will initially stock the bowlers at its flagship Regent Street store in London before rolling them out around Britain as part of a new collection commemorating the store's anniversary. Announcing the return of the hat, the store claimed it had "brought back the bowler hat as a nod to historic British fashion".
"British design is core to our heritage. Men and women are looking to history for classic, quality design and tailoring. The bowler hat is a key piece to communicate effortless British style," said a spokesperson form Austin Reed.
But the talk about their hats being made in China has disappointed some.
"There's a real revival going on at the moment, so this was a chance for a major retailer to get behind British milliners. But everyone is so used to buying fashion on the cheap that even Austin Reed customers are not prepared to spend more than £50 for a bowler.

It's a shame, but I'm sure that if they could guarantee the demand a British company could have come up with a competitive price to supply the hats.

But at least Austin Reed is promoting the wearing of hats, so that is a positive thing," said Georgina Abbott, who runs Atelier Millinery in London."
Posted by JOHN CALLANAN Hats eye_of_the_designer instragram at 7:07 PM