I think it is rather fascinating that pre William and Kate's royal marriage few commoners know what a fascinator was. According to a CCN new reports "they are hats that fasten to the head" which sounds a little scary to me as I imagine someone trying to staple the hat to their head. Lets look at the work fascinate to get a clue as to the ethnology.


First Known Use of FASCINATING

Synonyms: alluring, appealing, attractive, bewitching, captivating, charismatic, charming, elfin, enchanting, engaging, entrancing, fetching, glamorous (also glamorous), luring, magnetic, seductive.
Ergo, we deduce that a fascinator is a hat enhances the wearers looks. Fasinators, which are small diminutive hats, were inspired after the petites hats worn by Princess Eugenie, the wife of Napoleon 111. They became popular in the 1930's as a revolution to the face hiding cloche styles of the 1920's and also it was hard to get excessive materials as garnish for more classic hats during the depression.
So, princess Beatrice's scary creation is a scarinator and not a fascinator Princess Eugenie looks like a bovine beauty in hers. 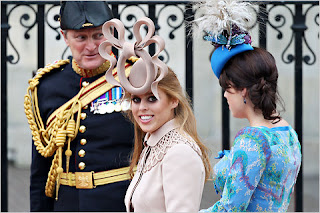 Is that Robbin Williams trying to gate-crash the event?
In the 1930's when fascinator where "la derniere cri", a writer for ESQUIRE proposed that "these unflattering hats were a plot hatched by homosexual milliners to make women look ridiculously unattractive to men". 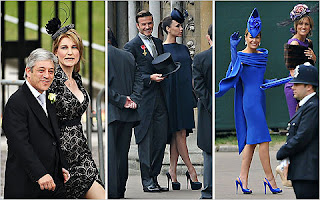 Leave to to the older girls to carry off the fascinator look. Sally Bercow keeps it simple and looks alluring. Victoria Beckham, should have put her hair up in a chignon to balance the forehead fascinator position but still look bewitching. Tara Pelmer Tomkinston pulls the whole look off to perfection and looks quite FASCINATING.
Posted by JOHN CALLANAN Hats eye_of_the_designer instragram at 4:34 PM