It has been 100 years since the last royal British visit to Ireland and boy how things have changed. Back then king George and queen Mary arrived as uninvited conquerors who governed an immense empire. It was a pompous affair to remind the Irish that we were inferior to our British overloads. 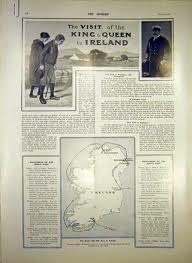 Betty arrived yesterday, an invited guest of a free people. YEP, she still a Queen but her empire and power has long vanished. Dressed in green from head to toe she looked like a cross between an Aer Lingus trolley dolly and an American tourist searching for her roots. 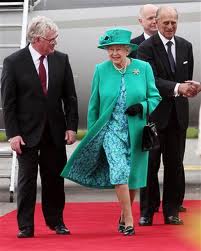 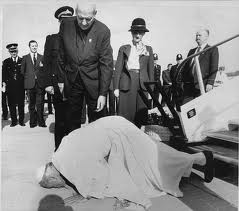 which  won over the Irish druids, pagans and leprechauns, Betty's debarkation was rather light footed. 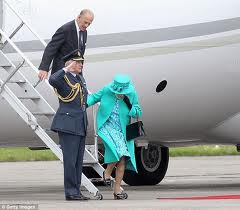 I think she looked down and considered it and trust me, from one that has descended many an Irish flight, that hat is stapled to her head. I have chase many a capeen down the tarmac. 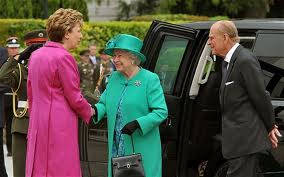 IRISH women historically did not wear hats preferring hooded clocks, so I am glad that our strapping President Mary Mc Alesse refrained from a fasinator or scariator. After the formalities, Betty was ready for her hols and some sight seeing. 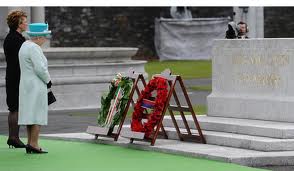 Memorial to the Irish freedom fighters (British preferred to call them terrorist). 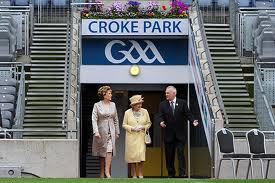 oh yes and where your soldiers mowed down 14 Innocent people watching a hurling game.
But it is over. We have moved on. We accept you apology for pass wrongs but you must accept that we cannot forget nor delete from our cultural memories the brutality that your lineage  handed down to our families. So Betty, let bygones be bygones. Have a great trip, we wish you a thousand welcomes, may the sun shine on you and tell all your friends to come visit. Keep smiling. 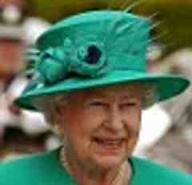 but as we say here in the USA (the other country that got away), these colors do not run.