What does a Starbucks Strawberry Frappuccino and a fez have in common?

THE ANSWER IS THEY BOTH USE DRIED COCHINEAL BUGS TO GET THE INTENSE RED COLOR NEEDED.
More below and red frappuccinos and fez.
Luzmila Ruiz holds a spool of dyed yarn, made from the cochineal insect, which is crushed in her hand as well as a ball made up of thousands of crushed insects, 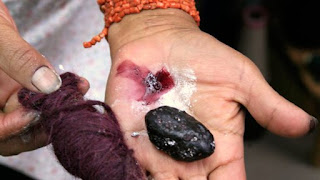 You can get your Starbucks Strawberry Frappuccino venti, grande or tall. You just can't get it without insects, to which it owes its pink and rosy color.
In what the company, in a statement, says was a move intended to reduce its use of artificial ingredients, Starbucks has started using cochineal extract to supply its Frappuccinos' strawberry hue. Cochineal extract is derived from grinding up insects, the dried bodies of cochineal bugs, found primarily in Mexico and South America. Cochineal dye has been used as a coloring agent since the 15th century.
Before you get all cold-and-bothered about your insect-Frappuccino, be advised: Cochineal is considered safe by the FDA, and is widely used for coloration in jams, preserves, meat, marinades, alcoholic drinks, bakery products, cookies, cheddar cheese and many other food products.
It has been found by the World Health Organization, however, to cause asthma in some people, and in some others an allergic reaction.
Starbucks' statement, issued partly in response to vegans' asking if the use of this ingredient makes Strawberry Frappuccino vegan or not, reads in full:
"At Starbucks, we strive to carry products that meet a variety of dietary lifestyles and needs. We also have the goal to minimize artificial ingredients in our products. While the strawberry base isn't a vegan product, it helps us move away from artificial dyes.
"Many Starbucks ingredients can be combined to create a beverage free from animal-derived products; however, we are unable to guarantee this due to the potential cross-contamination with other animal-derived products in our retail locations." Portrait of the Ottoman Sultan Mahmud II after his clothing reforms
The fez was developed to fashionable heights by Andalusian Arabs in the city of Fes, Morocco by the 17th century when fashions in Europe already changed in less traditional ways. The artisans involved in their making were the most selective members of the cities' Souqs.
After Sultan Mahmud II suppressed the Janissaries in 1826, he decreed that the official headgear for his modernized military would be the fez with a cloth wrapped around it. In 1829, he ordered his civil officials to wear the plain fez, in the expectation that the populace at large would follow suit. This was a radically egalitarian measure which replaced the elaborate sumptuary laws which signaled rank, religion, and occupation, allowing prosperous non-Muslims to express their wealth in competitions with Muslims, foreshadowing the Tanzimat reforms. On the other hand, tradesmen and artisans generally rejected the fez.[4]
Initially a symbol of Ottoman modernity, the fez came to be seen as part of an "Oriental" cultural religious identity. In Turkey, wearing the fez was legally banned in 1925 as part of the modernizing reforms of Mustafa Kemal Ataturk. In his speech attacking Ottoman dress as decadent, he condemned the fez as "the headcovering of Greeks", tarring it by association with the recent Greco-Turkish War.[5]
The fez was initially a brimless bonnet of red, white, or black with a turban woven around. Later the turban was eliminated, the bonnet shortened, and the color fixed to red. Praying while wearing a fez -instead of a hat with brim- was easier because Muslims put their foreheads on the ground many times during the prayer sessions.

The name is originated from the city of Fez in Morocco, which had a monopoly on the manufacture of fez caps, which were dyed with an extract of dried Cochineal bugs A young Bedouin man wearing a North African version of the fez.
A version of the fez was used as an arming cap for the 1400-1700s version of the mail armour head protector (a round metal plate or skull-cap, around which hung a curtain of mail to protect the neck and upper shoulder. The fez, presumably padded, raised up the metal plate an inch or two to provide effective protection from heavy blows. The fez could be optionally wrapped with a turban. Fez being made in Tunisia.
The red fez with blue tassel was the standard headdress of the Turkish Army from the 1840s until the introduction of a khaki service dress and peakless sun helmet in 1910. The only significant exceptions were cavalry and some artillery units who wore a lambskin hat with coloured cloth tops. Albanian levies wore a white version of the fez. During World War I the fez was still worn by some naval reserve units and occasionally by soldiers when off duty.
The Evzones (light infantry) regiments of the Greek Army wore their own distinctive version of the fez from 1837 until World War II. It now survives in the parade uniform of the Presidential Guard in Athens.
From the late 19th century on the fez was widely adopted as the headdress of locally recruited "native" soldiers amongst the various colonial troops of the world. The French North African regiments (Zouaves, Tirailleurs, and Spahis) wore wide, red fezzes with detachable tassels of various colours. It was an off-duty affectation of the Zouaves to wear their fezzes at different angles according to the regiment; French officers of North African units during the 1930s often wore the same fez as their men, with rank insignia attached. The Libyan battalions and squadrons of the Italian colonial forces wore lower, red fezzes over white skull caps. Somali and Eritrean regiments in Italian service wore high red fezzes with coloured tufts that varied according to the unit. German askaris in East Africa wore their fezzes with khaki covers on nearly all occasions. The Belgian Force Publique in the Congo wore large and floppy red fezzes similar to those of the French Tirailleurs Senegalais and the Portuguese Companhias Indigenas. The British King's African Rifles (recruited in East Africa) wore high straight-sided fezzes in either red or black, while the West African Frontier Force wore a low red version. The Egyptian Army wore the classic Turkish model until 1950. The West India Regiment of the British Army wore a fez as part of its Zouave-style full dress until this unit was disbanded in 1928. The tradition is continued in the full dress of the band of the Barbados Regiment, with a white turban wrapped around the base.
While the fez was a colourful and picturesque item of uniform it was in several ways an impractical headdress. If worn without a drab cover it made the head a target for enemy fire, and it provided little protection from the sun. As a result it was increasingly relegated to parade or off-duty wear by World War II, although France's West African tirailleurs continued to wear a khaki-covered version in the field until about 1943. During the final period of colonial rule in Africa (approximately 1945 to 1962) the fez was seen only as a full-dress item in French, British, Belgian, Spanish and Portuguese African units; being replaced by wide-brimmed hats or forage caps on other occasions. Colonial police forces, however, usually retained the fez as normal duty wear for indigenous personnel.
Post-colonial armies in Africa quickly discarded the fez. It is, however, still worn by the ceremonial Gardes Rouge in Senegal as part of their Spahi-style uniform, and by the Italian Bersaglieri in certain orders of dress. The Bersaglieri adopted the fez as an informal headdress through the influence of the French Zouaves, with whom they served in the Crimean War. The Italian Arditi in the First World War wore a black fez that later became a uniform of the Mussolini Fascist regime. The Spanish Regulares (formerly Moorish) Tabors stationed in the Spanish exclaves of Céuta and Melilla, in North Africa, retain a parade uniform which includes the fez and white cloaks. Filipino units organised in the early days of U.S. rule briefly wore black fezzes. The Liberian Frontier Force, although not a colonial force, wore fezzes until the 1940s.
The 13th Waffen Mountain Division of the SS Handschar, which was recruited from Bosnia, used a red or field grey fez with Waffen SS cap insignia. Bosnian infantry regiments in the former Austro-Hungarian Empire had also been distinguished by wearing the fez until the end of World War I.
Two regiments of the Indian Army recruited from Muslim areas wore fezzes under British rule (although the turban was the nearly-universal headdress amongst Hindu and Muslim sepoys and sowars). A green fez was worn by the Bahawalpur Lancers of Pakistan as late as the 1960s.
Many volunteer Zouave regiments wore the French North African version of the fez during the American Civil War.
ON a lighter note, here is a picture of Betty Davis IN A FEZ. 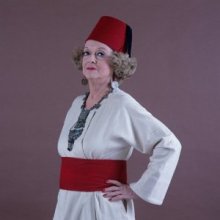 A Hyderabadi Muslim man in India wearing a Fez hat, locally known as a 'Rumi topi'
The fez is a part of the traditional clothing of Cyprus, and is still worn by some/many Cypriots today. Traditionally, some women wore a red fez over their heads, instead of aheadscarf, whilst men a black or red cap.[6] The fez was sometimes worn, by men, with material (similar to a wrapped keffiyeh or turban) around the base. In his 1811 journey to Cyprus, John Pinkerton describes the fez, "a red cap turned up with fur", as "the proper Greek dress".[7] In the Karpass Peninsula, white caps are worn, a style considered to be based on ancient Cypriot Hellenic-Phoenician attire, thus preserving men's head-wear from 2700 years earlier.[8]
The fez was introduced into the Balkans, initially during the Byzantine reign, and subsequently during the Ottoman period where various Slavs, mostly Bosniaks, started wearing the head-wear.
Among the Muslim aristocracy of South Asia, the fez is known as the Rumi Topi (which means "hat of Rume or Byzantium").[9] It was a symbol of Islamic identity and showed theIndian Muslims' support for the Caliphate, headed by the Ottoman Sultan. Later, it became associated with the Muslim League, the political party which eventually created the country of Pakistan. The late veteran Pakistani politician Nawabzada Nasrullah Khan was one of the few people in Pakistan who wore the fez until his death in 2003.
In Sri Lanka the fez was used as frequently by the local Muslim Sri Lankan Moor population. Despite its use declining in popularity, the fez is still used in traditional Moor marriage ceremonies.
A variation of the fez has been commonly worn in the Malay Archipelago since the 19th century when it was introduced by Muslims from South Asia. Known as a peci in Indonesianand songkok in Malay, this variant is black in colour with a more ellipse shape and sometimes decorated with embroideries. The Philippine varieties tend to be colorful and highly decorated.
A variation of a black soft fez was used by Italian blackshirts under the Fascist regime. This was in imitation of the red soft fez still worn by bersaglieri units.
In Libya, a soft black fez, called the checheya, is worn by the rural population with or without a long tassel. In the east, a red one called a chenna is worn.
In tourist hotels in Egypt, Tunisia and Morocco, porters and bellhops often wear a fez to provide local colour for visitors. 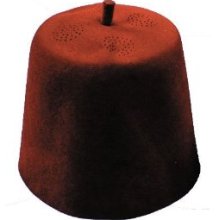 In the last era of the Ottoman Empire, a purple fez was used as a symbol of revolt by eshkiyas (bandits).
Posted by JOHN CALLANAN Hats eye_of_the_designer instragram at 12:01 AM