Apres golf can be a sexy look especially in a dapper John Callanan Legacy fedora. This profile can be found wit different trims in Lord and Taylor, Bloomingdales, Scoop and better fashion stores nationwide. As seen in the April 2010 Golf Digest.
www.golfdigest.com
Posted by JOHN CALLANAN Hats eye_of_the_designer instragram at 7:48 PM No comments: 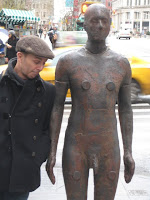 I really am liking the Anthony Gormley Instillations around the city. Seemingly the statues are based on his physique. I have spotted about 17 so far. I think they are more interesting perched on ledges rather than on the pavements.
Gormley Naked Men on Roofs Are Yours for $2.3 Million (Update1) 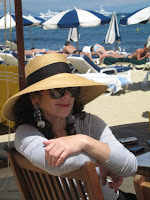 We love hearing from our customers.Especially when they look as glamorous as Lisa in St. Tropez.
"Wow…amazing customer response…amazing. I have attached 3 photos of me in the hat, actually from my house in the South of France, hence the need for “full-coverage !” (sorry for three photos, but I wanted to be certain you could see the “simplicity” of the hat…I LOVE IT !). It’s my favorite sun hat, and amusingly enough, even though I live in NY (am the CEO of a business) I wear it every day to & from work and on week-ends. Women always smile when they see a sun hat in NY, but everyone tells me how smart I am…and they ALL love the hat !

If it turns out you can still find me one, and on the off chance that there are two, I’ll take them. My beloved hat is two or three years old and while it’s still in great shape, it gets dragged to the South of France & back several times a summer…in the overhead “bin” of the planes …and if I can buy two, I’ll leave one in my house over there.

I hope you can find it for me, but regardless, I just want you to know that I am so impressed by your customer service, I don’t think there’s another Company I’ve ever received a response from so quickly.

Thank you so much.

www.yankthemusical.com
Yank, the WW11 GAY love story, is delightful with the exception of the dreadful ballet dream sequence a la Billy Elliot. Bobby Steggert as Stu is a wonderful young actor with a dreamy lover in Ivan Hernandez. The warning on "nudity" was a split second bum shot, so don't get your hopes up on seeing this handsome cast doing the full Monty. Extended for another 2 week.Yes , I nearly forgot the sole lady in the cast Nancy Anderson was a 1 women show all to herself. Wished she was better miked for the sultry singer roles. Buy a ticket today. You snooze, you loose.
THE MAGAZINE

YANK! gets it title from Yank Magazine, which grew to become the most widely read and most popular magazine in the history of the U.S. Army. By the end of World War II, twenty-three various editions of Yank Magazine had been published. At the height of the magazine's operations, there were printing presses in Honolulu, Cairo, Tokyo, Okinawa, Rome, Trinidad, Saipan and other places, and the weekly achieved a worldwide circulation of 2,600,000. It is thought to have been read by ten million. The magazine, which was staffed entirely by enlisted soldiers, printed its last issue in December 1945, realizing for the War Department a profit of $1,000,000.
DON'T ASK, DON'T TELL NEEDS TO BE REPEALED.
Posted by JOHN CALLANAN Hats eye_of_the_designer instragram at 9:43 AM No comments: They stand there, aloof, starring straight ahead, all seeing, all knowing. Are they angles, demons or extraterrestrials? Are they judging us or merely seeing us as ants as we scurry about below? Do they beckon out to each other late at night? The more I look for them the more I notice them and when I see a new one, I am as excited as when I notice a handsome man glance at me on the street.
Posted by JOHN CALLANAN Hats eye_of_the_designer instragram at 6:31 PM No comments:

The annual traveling Hat Salesman's association THSA, celebrated its 105th anniversary dinner at the Boat House in New York's Central Park on Thursday. The weather was glorious and the facetiae was bursting to put on a show of dazzling yellow for the crowd as they sipped cocktails while lingering in the last rays of the evening sun. A fun time was had by all. The ladies from the milliner’s guild attended this year which added a certain je ne sais quoi to the event. Mr. Baik from Korea was awarded the life time achievement award and announced a $100,000 sponsorship for young milliners.
I was suitable attired in a navy jacket with red/blue trim from top shop, cream pant from Stone Island, ridded white shirt from WE Paris and patent tip shoes from Hugo Boss and of course donning a panama boater from Scala.
Posted by JOHN CALLANAN Hats eye_of_the_designer instragram at 5:49 AM No comments: 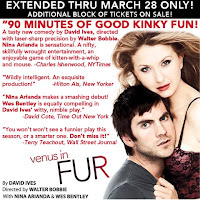 Once again Off Broadway has another success on it's hands. A show that might not even get a second look on Broadway. Broadway shows have become the McDonald's of culture. Bland and not good for the health. Both Nina Arianda and Wes Bentley are captivating. The set was a little annoying if you are stage left,as the chairs and table block the view of the actors and the seats are not the most comfortable but it is still worth the $75 and the actors have the audience in a spell so the time flies by. Extended to March 28.
Posted by JOHN CALLANAN Hats eye_of_the_designer instragram at 11:13 PM No comments: