What is a Pith Helmet

Crude forms of pith helmets have been around since the 1840's. and are typical associated with European colonial rule. All colonial powers used versions of the pith helmet. Even the US Army adopted it in 1880's for soldiers serving in the Southwest US.
The shape may have been influenced by the German PICKELHAUBE, worn during the Franco-Prussian war. The space for all intended purposes, is a man cloche.  Une cloche being french for a bell.  The cloche is more associated with ladies hats.
The shoal (sola)-style pith helmet—also known as the Bombay Bowler, the sun helmet, topee, shoal topee, salacity or topi, is a lightweight helmet made of shoal pith, with a cloth cover and a particular design and thickness designed to shade and insulate the wearer’s head from the sun. It was veery popular with the British colonialists in India, Pakistan, Egypt, Sudan, Iraq, Transjordan, Palestine, Sri Lanka, and other tropical and subtropical British colonies until the late 1960s.
The Shalo Pith used as the bass of the hat is a dried milky white spongy plant matter. Shalo grows in marshy waterlogged areas. When the pith helmet is soak din cold eater, the pith absurd the water and help deep the wearer cool in tropical climates. The original Indian shall helmets a re much lighter then the subsequent "cock" made pith helmets.
Later this style of hat became associated with colonial oppression and was slowly abandoned by the military, government, traffic police, etc. The Shola-style pith helmet usually has a flattened top and thick brim with either square or rounded edges. It is easily confused with other styles of "pith helmets" that were manufactured outside India and are usually made from cork or other materials. Some shola-style pith helmets feature a crisscross quilt-stitched cloth cover.

The latter had more rounded edges at the brim. The cork-style pith helmets, contrary to their misleading name, are not made out of pith; they are much thinner, heavier, and more rounded on the top.
Both styles of hats feature puggarees (pleated hatbands on the outside of the hat), air vents, khaki or white covers, and green inner brim liners. Pith Helmets were originally white and it was not until the Anglo-Zulo war, that the British troops dyed their white helmets with tea and mud for better camouflage. After this episode, khaki became the standard issue for active tropical service.Some have chin straps made of leather, in others they are made of cloth. Some Shola-style pith helmets feature a thin leather belt that runs from under the puggaree across the top. The chin strap commonly runs across the front brim. Shola-style pith helmets are still being sold in Indian, Pakistani, and Nepali polo-equipment stores, though they are seldom used in actual polo matches.

At the same time the military adopted a similar helmet of dark blue covered cork and added a spiked top for a more aggressive look. The dark blue cloth hemet went on to become the hard British bobby hat which we know today. Many military pith helmets have regimental insignia and feathers added as decoration.

The "WOLSELEY PITH HELMET", which became poplar in the early 1900's, is a distinctive British pith helmet and was the official pith helmet of the British army 1899-1948. This variation of the helmet was named after (but not designed by) Sir Garnet Wolseley and widely used by the British Army and Colonial civil service from 1900. The Wolseley helmet differs from other pith helmets in having a more sloping brim with a widows peak at the front and back. The dome is also taller and more conical than the other more rounded variations. It is the helmet often portrayed as being worn by stereotypical "Gentleman Explorers".

It was worn by diplomatic and consular officials in hot climates. Higher ups, like Governors and Governor generals were allowed to add 10-inch red and white swan feather plumes.
The last time it was seen worn as a colonial hat symbol was at the handover of Hong Kong back to China in 1997.

Posted by JOHN CALLANAN Hats eye_of_the_designer instragram at 1:40 AM No comments:

Hedi Slimane covered all his bases in his spring AMERICAN CANYON 2015 collection.

Little Bugle Boy jackets, ponchos, sheepskins, army surplus, embroidered jeans, shamans, amulets, snakeskin boots, in fact all the drag that a garage band would need for a night on the town. And of course what 1960's inspired rock star wound be seen naked without a great hat.

The sound track was by the underground MYSTIC BRAVES, who look a little like The Beatles.
Their Desert Island LP cover, even has a very 1970's peace and live feel about it
WWW.MYSTICBRAVES.COM

The hat of the collection was a brown CORDOBES style with trim inspiration that can be seen on the Mystic Braves safari style hats. 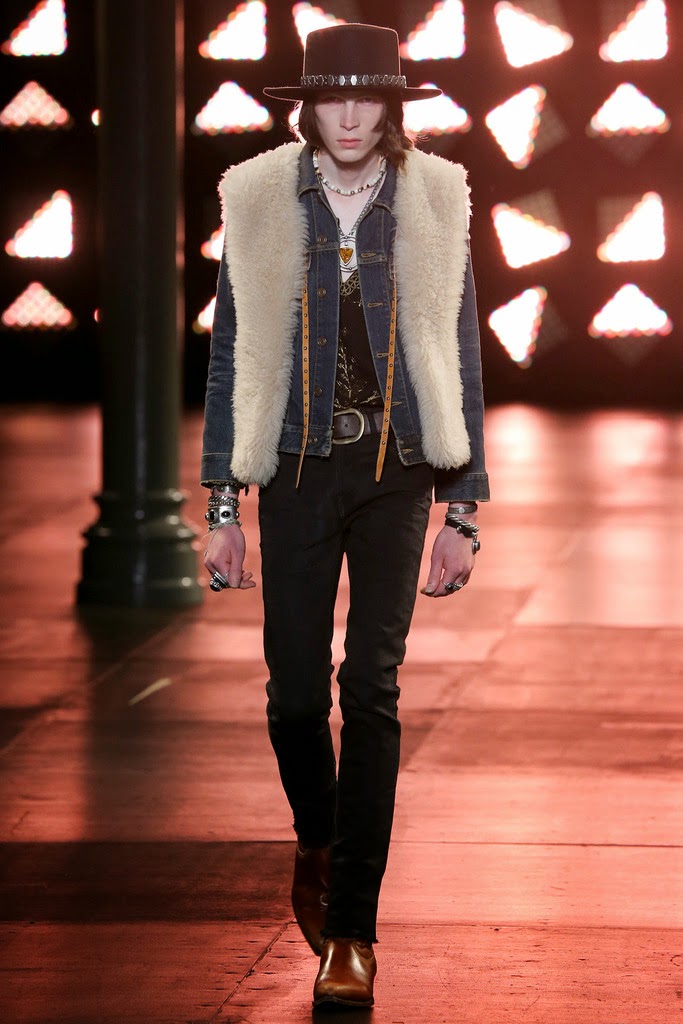 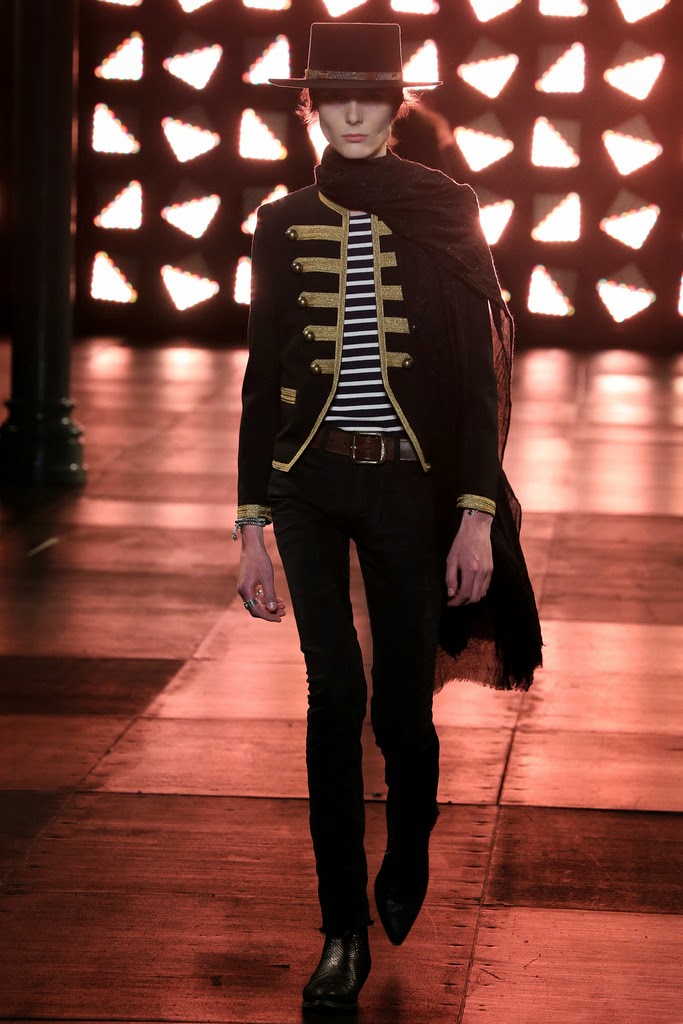 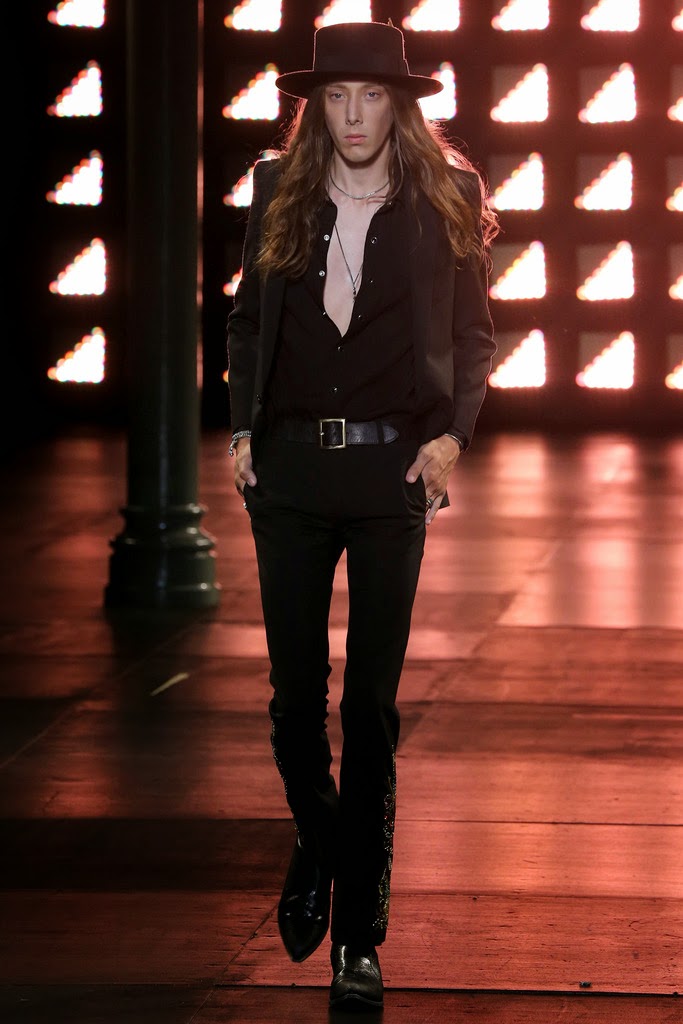 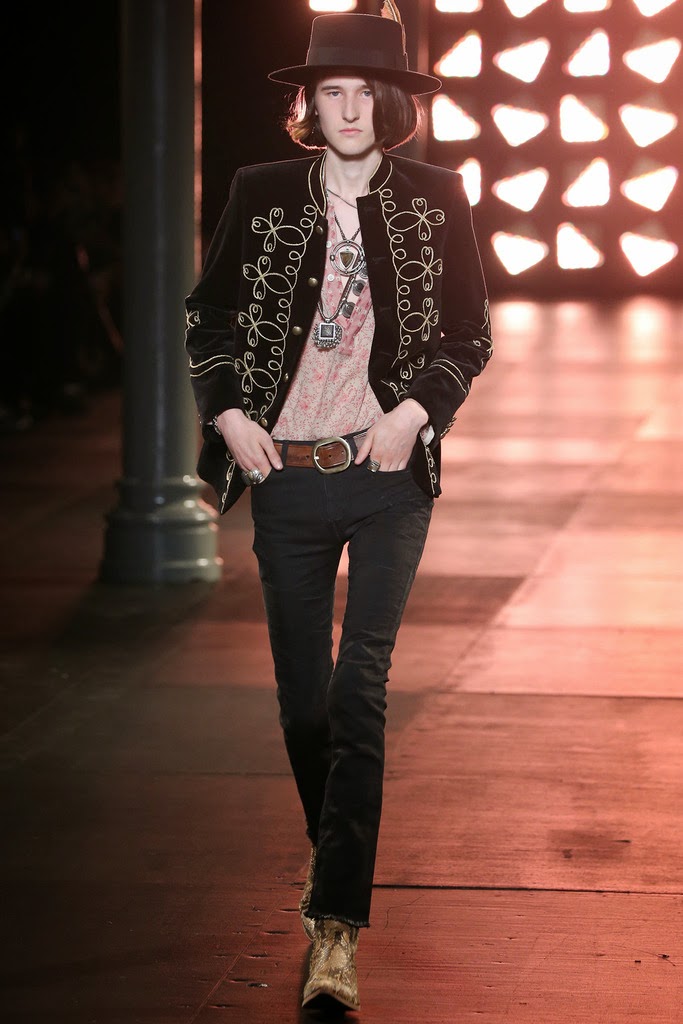 Posted by JOHN CALLANAN Hats eye_of_the_designer instragram at 3:46 AM No comments: