The late fashion editor Anna Piaggi’s hat collection will be on public display during Milan Fashion Week this September until November 30, as British milliner Stephen Jones curates an exhibition celebrating her obsession with headgear.


The ‘Hat-ology’ exhibition will be at the Palazzo Morando fashion museum from September 22 as the fashion world descends on the city for the spring/summer 2014 shows.
Women's Wear Daily reports that the show will ‘feature everything from a McDonald’s baseball cap to Chanel couture creations’ and presumably there will be plenty in between as Jones will have his work cut out for him attempting to edit the legendary editor’s hat collection. ItalianVogue contributing editor Piaggi, who died aged 81 in 2012, was rarely spotted without a hat on the front row.No doubt she would have trusted that Jones was up to the job though as she once said: ‘Stephen Jones is the maker of the most beautiful hats in the world.’


Anna Piaggi didn’t just wear hats -- she lived them. This much is evident in Hat-ology: Anna Piaggi and her Hats, an exhibition of around 150 hats on view now in Milan. It’s a greatest-hits of the late, great Italian fashion editor, who died last year. 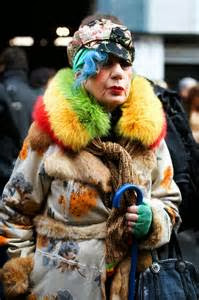 “She didn’t just wear hats, she lived surrounded by them,” the show’s curator, Stephen Jones, told The Daily Beast during a press preview at Milan’s Palazzo Morando Costume Moda Immagine.
The British milliner designed the exhibition in four small rooms, designed to give a “flavor of her Milan apartment.”

“Her home was stuffed with hats,” said Jones, adding that Piaggi owned over 800 pieces.
The exhibition begins in the living room, with one corner decorated with her original furnishings. The room is dedicated to Italian hats, one of which is perched on the top of a surfboard, with others placed on top of magazines and some hanging from walls. An elongated top hat that looks like something from a Tim Burton film and a white clown hats are among the room’s finds.
“This is her stuff and this is how she lived with hats everywhere,” Jones said.
The hats have been grouped according to categories, like pink hats and blue hats, which are displayed in the kitchen.
A blue Comme des Garcons wig from 2003, created by Julien D ‘Y’s, is on show in the kitchen, as well as an unlabeled 1930s boater with osprey feathers, from around three dozen hats in this room.
In the Press Room at the center of the exhibition, there are three display areas divided into themes: graphic hats, text hats, and surreal hats.
On display in the text category is a paper boat hat made by Jones in 2005 from a copy of the International Herald Tribune, which Piaggi wore when Suzy Menkes, the paper’s long-time fashion editor, received her Legion of Honor.
One hat in the Press Room is designed from black velvet with a violin perched on top of a skull cap.
Indeed.
“My hat is personal,” Piaggi said in 2011. “It is what contains the soul, the feeling, the sensation that moves this little world around.” 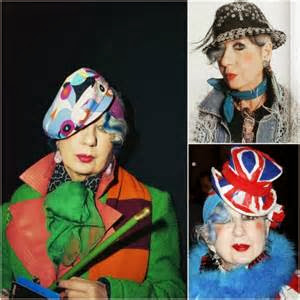 In the bedroom, the display areas are divided into sections titled “Dreaming of Paris,” “Dreaming of London,” and “Dreaming of Milan” which show her hats associated with the world’s fashion capitals.
The Paris section includes a flat cap for Dior by John Galliano, created by Jones in 2006, and a Half Moon Chloe hat created by Janine Montel in 1979.
“Dreaming of Milan” includes a Missoni turban from the 1980s, a floppy hat from Dolce & Gabbana from Spring/Summer 1992, and a 1940s Trilby by Schiaparelli. The London section contains an unlabeled black school boy’s cap from the 1980s and a lace lingerie hat from the 19th century.
“Anna collected hats everywhere and had a large collection of Dior, Chanel, Philip Treacy, and several hats by me,” said Jones. 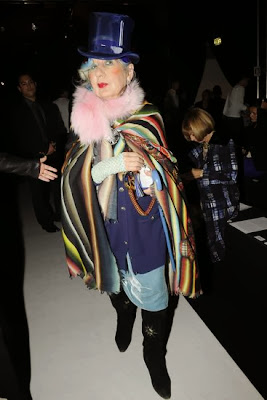 “The first thing Piaggi did each day was put on her hat,” said Jones, who first met Piaggi thirty years ago. “It stabilized her and she felt wobbly without it.” 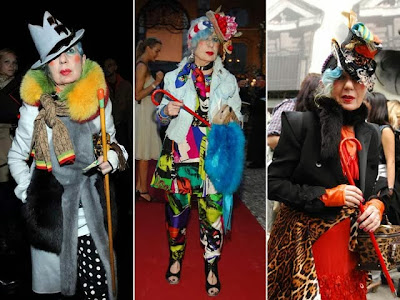 Posted by JOHN CALLANAN Hats eye_of_the_designer instragram at 2:50 AM