The Bowler, The Gent, The Avenger, Mr. JOHN STEED. 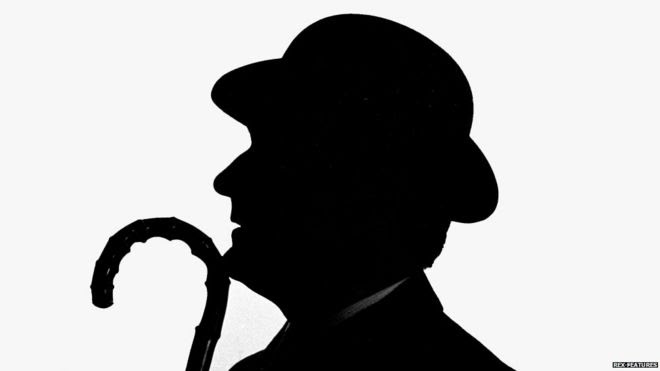 Patrick Macnee, who has died age 93, was indelibly associated with the bowler hat he wore as his character, gentleman secret agent, John Steed, in The Avengers. Patrick Macnee was synonymous with his character's trademark Savile Row suits, umbrella and, of course, his bowler hat.
The hat wasn't just for show. It was, along with his sword-concealing umbrella, Steed's main weapon of choice and was regularly lobbed at villains. Lined with chain mail, at various times it also served as a flashlight, a place to conceal a gun and even as a radio transmitter.
It became - along with the catsuits of Steed's female assistants - the key visual motif of the show. In France, The Avengers was known as Chapeau melon et bottes de cuir - Bowler hat and leather boots.

Macnee created Steed's distinctive look himself, He may have chosen the bowler hat as a symbol of quintessential, BRITISH GENTLEMAN, but its origins are more workmanlike.
The BOWLER HAT was made by the world's oldest milliner, Lock & Co, in 1850 as a form of protective head wear. Its original name was actually a Coke - named after the soldier and politician William Coke, who ordered the stiff felt hat to protect the heads of his gamekeepers who worked on his Norfolk farm, from low hanging tree branches, as they chased poachers, on horseback.
The prototype was made by Thomas and William Bowler, hat makers in Southwark, and brought to St James's Street to be tested by Coke himself.
He did so by jumping on it and, because it withstood his weight, he bought it. The Coke became commonly known as a Bowler, after its makers. In America it became known as a Derby, after the horse race.

The bowler remained popular from its conception to around World War Two. Thereafter becoming "the hat" usually sported by City gents in London, before being reduced to something of a theatrical curiosity worn by Charlie Chaplin and Laurel and Hardy and of course the iconic Liza Minnelli as Sally Bowles in Cabaret.

But this headgear still has a wide range of fans and wearers today, for reasons both fashionable and traditional, from ex-boxer Chris Eubank to actor Jude Law, while other entertainers like Britney Spears, Ferne Cotton, and Daisy Lowe have picked up on the trend.
The original illustrations of Sherlock Holmes often depicted him in a bowler whenever he was in London.

The bowler hat is a symbol of middle class British respectability, it was also "something that manual laborers would wear for their Sunday best, becoming an aspirational item for them".


The Bowler hat was recently used in the popular BBC series PEAKY BLINDERS, to give an air of respectability to Sam Neil's debauched character Inspector Chester Campbell.
But Bowler Hats also have a darker place in popular culture, thanks to their time perched atop the ultra-violent Droogs in Clockwork Orange, who assaulted people while wearing that headgear. It is also associated with Northern Ireland's Protestant orangemen, who also assault their Catholics neighbors, during their annual march.
"The bowler hat is associated with respectable, conventional living, so for those characters to wear them and commit those heinous crimes is morally transgressive,"
John Steed would have soon bowled those criminals over, no doubt.
You can buy a classic bowler/derby hat from your local hat shop.
Just ask for a SCALA style # WF506-BLK, CHOCOLATE OR CHARCOAL 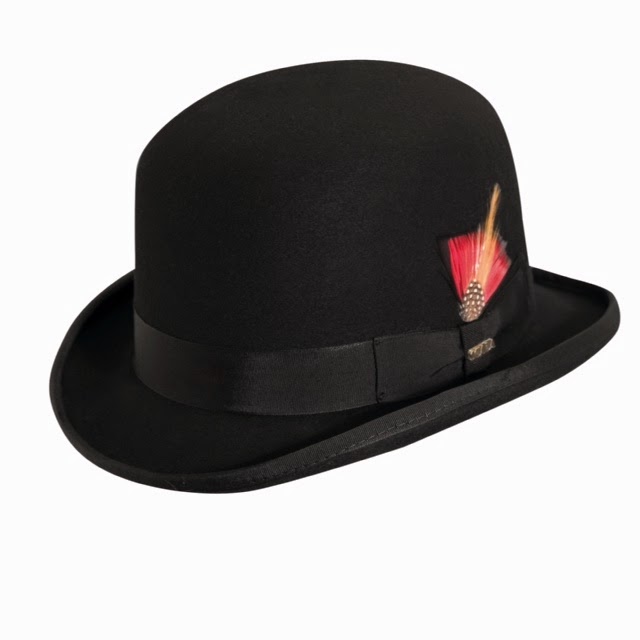