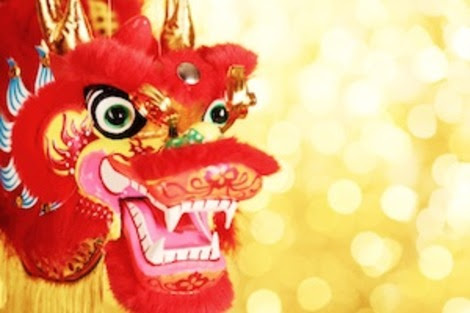 The Lunar New Year is celebrated in China, Taiwan, Korea, Vietnam, Mongolia, and Tibet, as well is in countries such as Singapore that have large Chinese populations. Christopher Livaccari of the Asia Society explains to Yahoo! Shine that it used to be celebrated widely in Japan, but now most Japanese people consider January 1st to be the main New Year's holiday.
Related: Coming Home for Chinese New Year
Year of the Dragon
This year's Lunar New Year begins on January 23, which is the first day of the first new moon of the year. It ends 15 days later on the full moon. The Chinese calendar is divided into 12 cycles each represented by a special animal. According to Chinese Astrology, this year is the year of the Dragon, the only mythical animal in the zodiac. People born in the year of the Dragon are said to be energetic, charismatic, and natural born leaders. Some famous "Dragons" include Joan of Arc, Vladimir Putin, and John Lennon.
Lunar New Year Traditions
Celebrations of the coming year commence on the eve of the first new moon with a feast and fireworks. Families clean their homes to symbolize a fresh start and buy flowers and plants, which represent rebirth. Often, gifts of new money or money in red and gold envelopes are exchanged to bring good fortune. Livaccari told Shine, "I think some people tend to think of these holidays and celebrations as something very exotic, but most people in contemporary East Asia see this time as an opportunity to take a break from school and work and reconnect with family, much like we would on Thanksgiving or Christmas."
Lucky foods include dumplings and other stuffed delicacies which symbolize little packages of good fortune, oranges which in Chinese sound like the word for "auspicious," and apples which sound like "peace." Fireworks are detonated to ward off evil spirits. Boisterous dragon dances are also performed to scare spirits away.
A tradition that kids will like is that parents aren't supposed to scold their children during the Lunar New Year. Livaccari also points out that, just like in the West, "Your average 14 year-old in Beijing, Shanghai, or Seoul is probably more focused on this as a chance to get some more time to play video games or interact with friends online."
Posted by JOHN CALLANAN Hats eye_of_the_designer instragram at 4:54 AM