Great photographs of queen Elizabeth curtesy of people Magazine February 2012.  Fashion may come and go, but not for the Queen, who is never caught without her hat and radiant smile. She certainly has her own head ware  style and seldom veers from it. The princesses Beatrice and Eugenie would do well to ask grand mama for a little hat advise now and then. 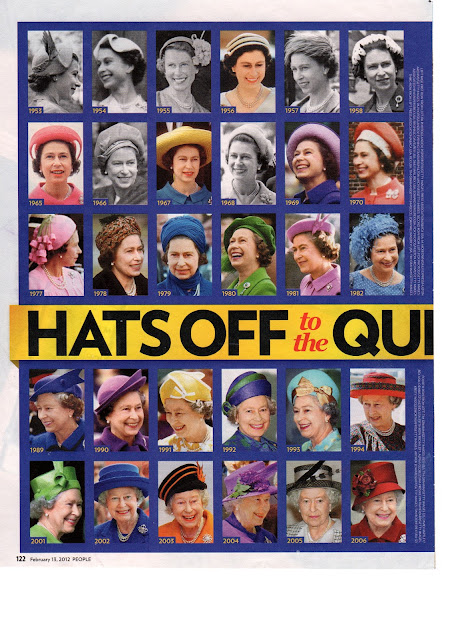 Her coquettish hats from the 50's are so classic and elegant. 1961 and 1962 look a little scary as do 1972 and 1973. No wonder women stopped wearing hats in the 70's. Those turbans are not very flattering. I remember my grand mother arriving at our home every Wednesday wearing some type of turban. 1992 is not a flattering hat, she looks more like the queen mother than herself. 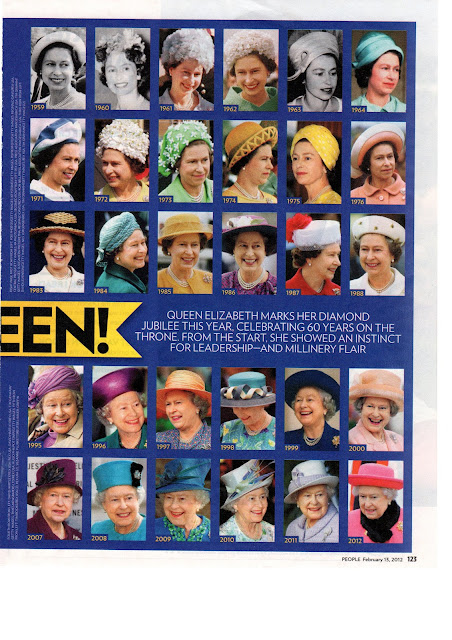 The queen really comes into her own hat style from 1989. She starts to wear hats that have more angles which compliment her round facial features. She also picks hats with a side up-swoop which optically give her a little extra hight. 1994 and 1995 were bad hat years for her. She looks best in a blue/teal/aqua pallette. The pastel of 2000 and 2012 just wash her totally. She should avoid Breton/saucer brims like 2012, they never flatter a round face. No fascinators for the Queen. No the Queen of Hats is much too stylish for that silly trend. Long live the Queen of Hats, long live Queen ELIZABETH!!!

Posted by JOHN CALLANAN Hats eye_of_the_designer instragram at 3:30 AM