The 'Hatwalk' comes to town

The likes of Lord Nelson, King George IV and Queen Victoria have been given new hats thanks to 'Hatwalk', the latest creative project to celebrate the Olympic Games.
BY BIBBY SOWRAY | 30 JULY 2012 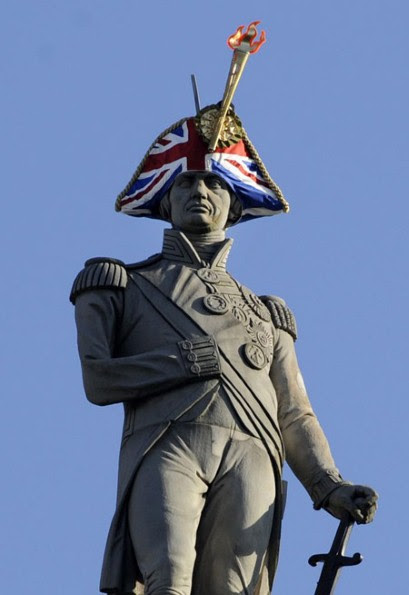 Lord Nelson wearing his new hat by Lock & Co and Sylvia Fletcher. Photo: Getty
When Stephen Jones told the Telegraph back in May that 2012 would be the year of the hat, citing Ascot and the Jubilee as the main reasons, little did we know that there was another, rather surprising, reason for his belief that he was keeping firmly under his, well, hat.

This morning that secret was finally revealed when 'Hatwalk', the Boris Johnson brainchild curated by Jones and fellow milliner extraordinaire Philip Treacy, was unveiled in London's Trafalgar Square.
The project, which is part of the London 2012 Festival, sees 21 established and emerging millinery talents recreate headwear for some of the capital's most famous hat-wearing statues - including Lord Nelson, King George IV and Shakespeare.
Beginning in Trafalgar Square, the situation of some of the city's best-know statues, Nelson's iconic bicorn hat has been updated by Sylvia Fletcher and Lock & Co (the very same milliners that created the original) to include a Union Jack and Olympic flame. King George IV - and his horse - now wear lavish crowns created by Stephen Jones and inspired by the Brighton Pavillion, the late King's seaside retreat, and Sir Henry Havelock dons a iridescent satellite creation by Philip Treacy.
"The rest of the world see hats as an innately British thing so this is a great celebration of that, our eccentricity and our talent for millinery," Jones told us before revealing that the Duchess of Cambridge is his current favourite hat wearer. "The designs that Sylvia Fletcher creates for her are perfect. They obviously have such a bond when they work together. The hats never wear her, she always wears them."
The project was born about a year ago, thanks to the Mayor of London, and has involved the employment innovative techniques to ensure that the pieces don't damage the statues, but also so that they will withstand the British weather.
"The idea is to make tourists and London to look again at the history of the city and these incredible historical figures, the kind of people that made Danny Boyle's narrative of history come to life in the Opening Ceremony," said Munira Mirza, Deputy Mayor for Culture and Education.
Other designers involved include Charlie Le Mindu, Piers Atkinson, Gina Foster and J Smith Esquire, who have created pieces for the likes of Isambard Kingdom Brunel on Victoria Embankment and Queen Victoria on Blackfriars Bridge.
The hats will be in place around London for the next four days, and life-sized copies of the pieces are on display in BT House at BT London Live in Hyde Park until August 12.

Various statues across London, including the famous one of Admiral Lord Nelson in Trafalgar Square, have received specially commissioned headwear to celebrate the best of British millinery talent.

Statues across London have been, specially designed by some of Britain's top hat makers, including Philip Treacy and Stephen Jones.
The two also curated Hatwalk, a new project, which aims to both celebrate London as the home for traditional millinery and draw attention to some of the capital's most iconic yet overlooked statues.
A total of 20 statues can be seen donning new headgear. Amongst them are the statues of Admiral Lord Nelson in Trafalgar Square and former US president Franklin D Roosevelt, whose statue sits next to that of Winston Churchill on a bench in Bond Street.
Lord Nelson's new updated bicorn hat showed the British colours and came complete with a replica of the Olympic torch, designed by London's oldest hatters, Lock & Co who are famous for making the late admiral's original hat.
John Boyd designed Roosevelt's new headpiece, which attracted attention by tourists, who were eager to pose on the bench next to him.
examples include designs by renowned designer Stephen Jones, who gave the crown of King George IV in Trafalgar Square a new look. Philip Treacy, who is best known for his collaborations with Alexander McQueen, crowned the British General Sir Henry Havelock with a very modern headpiece.
Hatwalk is part of the 'Mayor of London presents' initiative that sees various pop up initiatives around the British capital.