JOHN GALLIANO has a new home.

We all make mistakes, say thinks that maybe we should not, but everyone needs a second chance when asked for forgiveness.

I hope that John Galliano has banished his demons and learned humility  as he is a super designer.
I met him a few time when he was a lad at Saint Martins college. He was always nice and always so creative.

Galliano Emerges From Exile to Head Martin Margiela
October 6, 2014 by MRketplace Staff Leave a Comment
Following three years of exile for inappropriate comments, British designer John Galliano is emerging from the shadows to take over the creative direction at Maison Martin Margiela, the house said today.
Galliano, 53, has been considered one of the most brilliant fashion minds in this generation but his antics and drinking got him into trouble in September 2011—hurling abuse at people in a Paris bar.
The Paris criminal court found him guilty of proffering anti-Semitic insults in public, an offense under French law, on two occasions in February 2011 and October 2010. The disgraced Galliano has been rarely seen since being conviction.
Big Plans for Margiela?
Due to his 15-year tenure at Christian Dior, Galliano may have been brought into Margiela to expand and upscale that brand. Galliano’s first show, for the “artisanal line” will be held during Paris couture week in January.
“Margiela is ready for a new charismatic creative soul,” said Renzo Rosso, president of president of Only the Brave, which owns a majority stake in Maison Martin Margiela. “John Galliano is one of the greatest, undisputed talents of all time. A unique, exceptional couturier for a Maison that always challenged and innovated the world of fashion. I look forward to his return to create that fashion dream that only he can create, and wish him to here find his new home.”
In a personal aside, Rosso said: “I couldn’t be happier, for the Maison Margiela, which deserves a new visionary leader, and for John Galliano, who is a talent beyond definition and time. I always believed in brave, unpredictable choices and this one is no exception.”
Fashion insiders reportedly believe Galliano was a real surprise, and not just because of his antics. Margiela, the Belgian founder of the house, was known as fashion’s “invisible man.” Galliano, on the other hand, is renown for his showmanship. His appointment suggests that Rosso has big plans for Margiela. 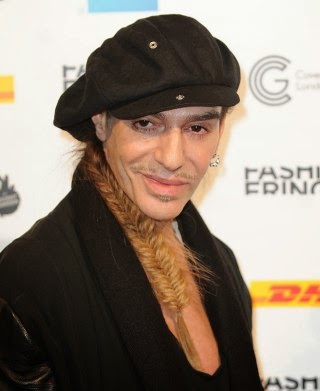 After weeks of speculation, it's official: John Galliano is returning to fashion to assume the creative direction of Maison Martin Margiela. "I couldn’t be happier," Renzo Rosso, president of Margiela's parent company, OTB, said in an e-mail sent to editors this morning. "For the Maison Margiela, which deserves a new visionary leader; and for John Galliano, who is a talent beyond definition and time." Given the controversy surrounding Galliano as well as his undeniable design skills, the appointment will no doubt cause a range of reactions, both for and against. Kanye West has already tweeted his approval: "It is very exciting to see what powerful creatives do at different houses... Hedi at Saint Laurent, Nicolas at Vuitton, and now John at Margiela."
On the surface, Galliano is a very different designer from the Maison's original and long-departed founder, Martin Margiela, so it will be fascinating to see what direction he now sets for the house. Continued Rosso: "I always believed in brave, unpredictable choices, and this one is no exception."